Merry Christmas to all who celebrate! And to those who celebrate another time, please accept my good will as I raise a glass of grog (or alternatively, a nice cold glass of prosecco) in your honour!

It seems like only a year ago that I sat down and wrote Christmas letters to far-flung family and friends, regaling them with the perfection that was my previous year and wishing them even a fraction of the utopia that is the life of Fluffy.

This year I’ll treat them (and you) to a slightly different analysis of the year that was; i.e. the main occurrences in 2019 were these: 1. My dog died and 2. Men suck. 3. I got old. These do not seem to be the usual joyous events lovingly described in Christmas letters, but that’s the challenge. How to make convince people who don’t really care that my life is a exuberant dream that they should envy, when the news seems less than ebullient?

My dog was a very good dog, a black and fluffy dog. He got old before I did, and so we had to set him on his journey to the Rainbow Bridge. Sad? No, because a dog’s afterlife is a certainty: they go to a green meadow in a heaven where they can run and play with other animals, indulge in delicious treats, get belly rubs on demand, and in general  enjoy the kind of blissful existence they deserve.  People may go to heaven, hell, purgatory, or, more likely, nowhere to spend their eternity, because people are imperfect. Dogs are full of nothing but love and should (if they are not) be the centre of the Universe. If you disagree with me, you have never had a dog.

Men. I have a father, a husband, brothers, male friends, a beloved nephew… but holy shit, men suck. Think Donald Trump, incels, war-makers, sexual harassers and assaulters, arms dealers, rapists, Woody Allen, and the guy who really set me off, a piece of work by the name of Tommy Callaway, who felt entitled to slap and squeeze a reporter’s ass as he ran by her. What kind of person thinks it is ok to sexually assault a young woman or any woman, and who thinks his utterly cynical and smarmy “apology” is more meaningful than a poop bag? Tommy Callaway, that’s who. Tommy Callaway and, presumably, a huge population of men who seem to think the whole Harvey Weinstein thing, #metoo— and, one assumes, sexual assault in general, is nothing but an overrated joke. How else do you explain the man, his grope, his excuse? Men suck, that’s how. (Yet my father, husband, brothers, male friends, beloved nephew wouldn’t even dream of groping a woman— why are the good men like them never in the news? I know why, because being baseline decent is not newsworthy, so we have to hear about the Tommy Callaways grrr of the world.)

And I got old. I went to bed one night, a dewy, lithe, fluffy young woman and woke up as an ancient relic. To be honest, I am not so much a relic as fighting to wipe that thought out of my head. Every little twinge in my back, every bit of fatigue, every fleeting whiff of forgetfulness is now a reminder the size of a skyscraper that my dewy days are done. The real cherry on the top is the fact that my aging will be held against me, I will become invisible and easily dismissed while guess who will grow old with looks that become more distinguished and whose credibility increases? Men, that’s who.

Well, I hope you enjoyed my Christmas letter! I promise you that my contention that men suck in no way diminishes my great love for them. That’s what comes with extreme old age: you can hold two opposing thoughts in your ancient rattling head at the same time.

Have you ever noticed that sometimes you are part of the day, and other times you are merely on the edges of it? When you are part of the day, the air moves aside as you walk, you take up space, the things you touch know you are there, you can hear the humming from inside the house, and the geese calling from the outside of the house. You feel yourself breathing. You takes steps with purpose. You have a destination.

When you are on the edges of a day it is all around you, being a day, but you stand unnoticed. You go through the motions. You look without seeing. You can’t identify sounds. You are a formless observer. You are unconnected.

Those latter days are biding time days. Waiting days. Futile days. You can never float on those days; instead you feel as if the earth might swallow you up.

I’m only half-kidding. Edibles embody a variety of legal (in these parts) herbal confections that take the edge off living on the edges of a day. In fact if used incorrectly can make you feel so much a part of the day that you can’t think separately from the day. The lines blur just a little too much. Otherwise, they relax the muscles in your face, calm your heart, allow you to move a little more lightly through the air of the day.

With the calmness that edibles bring (even though I don’t have any at the moment), may I present a few of my favourite cartoons very tenuously related to the formidable prompt, “fear”? 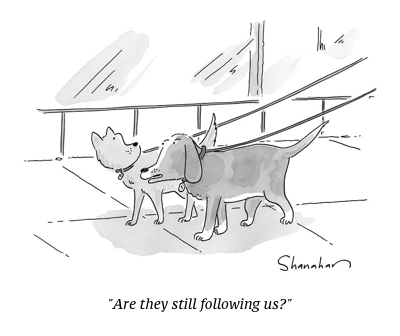