When I was backpacking in Europe, my travel companion and I borrowed/ leased a really terrible car (a lemon of a VW Beetle) for the latter part of our journey. While in Greece, we had to surrender the thing to a garage for some necessary repairs, and this set us back financially. We arranged to have some money sent to Zurich, and to reach the city economically we took on two paying passengers, Richard and Brian.

The car was mechanically sound by now, but a wreck nonetheless. The driver’s side door had been struck by a motorcyclist and could no longer be opened. The driver’s seat had come off its rails so needed a person in the rear seat to brace their knees against it for stability so the driver wouldn’t be flung backward. The passenger side door wouldn’t securely close, so once we were all seated inside it was tied shut by a length of twine. The gas gauge and reserve tank did not function and we were constantly running out of gas in the middle of nowhere (once in the country on the opening day of hunting season– scary). The heater was constantly blasting, and the windshield wipers didn’t work at all.

This was fine until we reached the Swiss border. We were selected, perhaps because of our rather scruffy appearance, to have our luggage searched. They also took apart the poor beleaguered VW Beetle. And of course they found Richard’s stash of unlabelled pills.

The put the car back together (without fixing anything, alas) and cheerfully told my friend and I we could carry on, but Richard and his biscuit tin were suspect and he would be detained at least overnight. Richard was aghast and panicked. “Wait for me,” he pleaded as he was marched away, perhaps fearing he would rot away in a foreign jail cell without anyone ever knowing. “Of course!” we called out to him.

We spent a comfortable night at the border town on the Swiss side and in the morning packed up the car, excited to be so close to our destination. We weren’t sure where Richard was, and in any case, much to my eternal shame, we didn’t really care. I suppose we were naively optimistic about his fate as well as hungry (close to literally) for the cash that awaited us in Zurich. So we got in the car and drove around the town, looking for the directional sign to get us on the road to Zurich.

Purely by accident we came across Richard meandering down a sidewalk with his backpack. He waved ecstatically and climbed in with great relief. “I knew you wouldn’t desert me,” he said in gratitude.

May I now present a few of my favourite cartoons relating to the prompt, memory, the first of which I don’t totally understand? 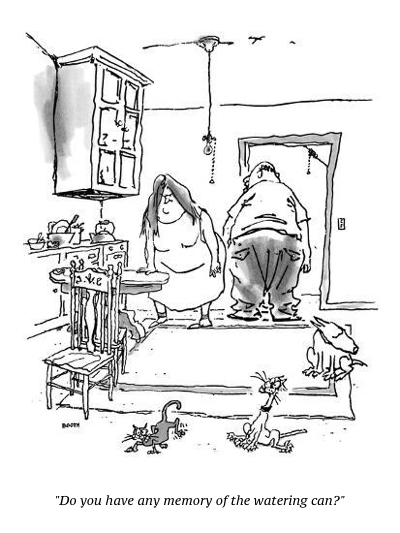