When you look out a window and see the tops of trees and think only about trees for a moment, it’s hard to be upset with what’s going on in the world. The problem is that we can’t look at trees forever, all the time, and are instead bombarded with news of great injustice, which we attempt to mitigate in our small ways or big ways, but which stress us so much that we need the visions of trees to calm us down again.

Balance, that’s what life is about. So sure, I can hug and scratch Rosie the therapy dog for half and hour, and feel like Anne of Green Gables. Afterward, when I turn on my device or switch on the news I am faced with IT again. For the moment, IT is personified into the image of one person, who is ignorance, malice, greed, and egoism with two arms and two legs, fake hair, and a fake tan.

Please go and gaze at treetops if you can’t take either IT anymore, or criticism of IT’s personification. I won’t rant, or swear, or write graffiti, or stick pins in anything. I’ll just submit for your enjoyment/ dismay/ venting a few of my favourite cartoons and one angry quotation. Warning: Serious cussing ahead. 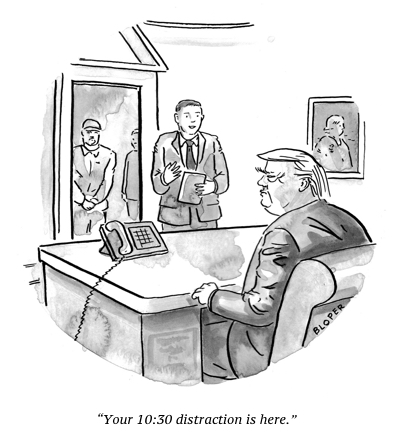 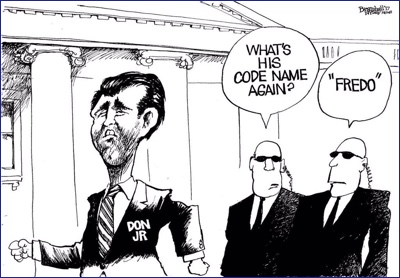 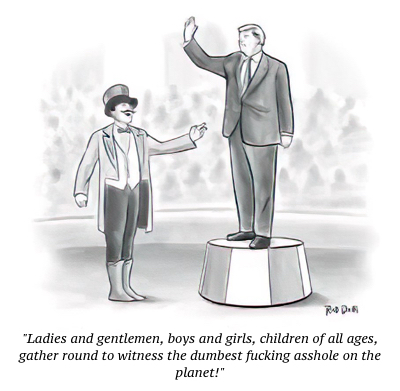 Donald Trump is also a coward. For all of his tough talk and bluster, the president of the United States is a punk ass bitch. And this has also been apparent for as long as we’ve known who he is. He slipped out of draft duty because of… bone spurs. Bone spurs don’t even get you on the NFL injury report, but he used it to stay the fuck away from actually having to fight. We know his history of bullying and insulting women. And, since he’s been in office, we’ve seen him cower to Kim Jong Un and literally get Deeboed by Vladimir Putin — two men who, for all of their faults, would definitely whoop Trump’s ass.

We’ve had racist presidents before. We’ve had malignant misogynists in office before. But never has our president been such a fucking wimp.

—Damon Young, Just Remember That Your Punk-Ass President Would Never, Ever, Ever Call LeBron James Dumb to His Face, in The Root, published August 4, 2018.

Sincere wishes for peace and love from someone who is actually quite calm and gentle,