Coincidence in the first of today’s cartoons refers to a board of directors in hell.

I don’t wish ill on anyone, as a rule, but I have to say, some of the greedy corporate monsters who put lives in peril, consider profit more important than health and safety, who weigh pros and cons based on income only even when men, women, and children are adversely affected, who betray every sense of caring and decency in the name of greed and power… well, I wish hell existed for you. I’m sorry, you need to spend something close to eternity contemplating the harm you have done— and the good you might have accomplished with the resources you controlled.

For the rest of us, how about some rabbits and squirrels? 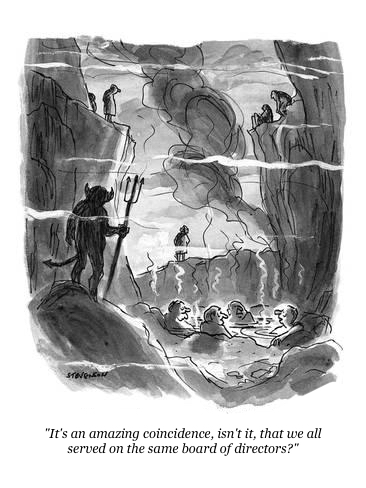 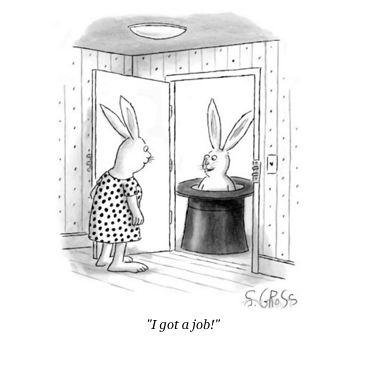 The word “crumb” used to be an expression of frustration when I was a kid, as in “Aw, crumb!” when the rabbit ears on the TV weren’t picking up the signal during the Ed Sullivan Show.

Now it can refer to the American satirical cartoonist, Robert Crumb; or more likely, what sticks to your skin when you eat toast in bed.

May I now present a few of my favourite cartoons, the first of which is related to today’s Daily Prompt: 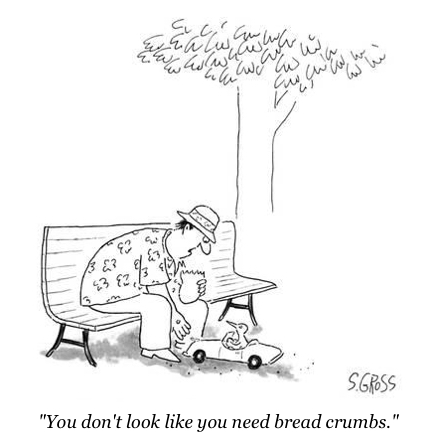 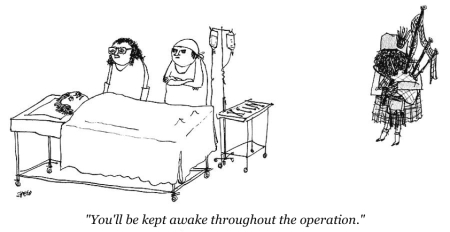 There once was a pupil named Jane
Who lacked an intelligent brain
She got some uranium
To rub on her cranium
And she never felt stupid again.

“And what were you doing before you started running away?”

“I was on a swing, in the park beside the school,” said Folly.

“Where is the school?”

“Down past that traffic light,” she said.

I accelerated and we lurched forward on the little Yamaha TW we’d found leaning up against someone’s garage door. I wanted to get around quickly for this “game”, not lumber through town from inside a closed vehicle.

Every red light still triggered a stop impulse, but this time I didn’t even slow down. Folly was clinging to me tightly, her hands bunching the front of my down vest.

I saw the swings, and the small adventure playground, the soccer goalposts, and the tiny basketball court, all neatly laid out beside a sprawling one-story elementary school.

“I sat in that swing,” said Folly. “There was a puddle on the ground under it, and my feet got wet.”

“And before that?” I learned that Folly was more comfortable answering questions when we were not face to face. We slowed to a stop and but she did not release her grip on me. I could feel her cheek pressed against my back.

“Where? Which way is home?” This was as far as we’d ever gotten, and I felt it was our last chance to find Folly’s house and get her memories back.

She had the bad memories. The inside of her head was a once a safe garden, but the garden was now overgrown with thorns and weeds and their alien blooms, choking out the lilac and brilliant pinks of the hydrangea and the lime leaves of the ninebark, twining around her thin legs freezing her in place.

I could feel her trembling, and resisted the urge to comfort her. “Which way, Folly?”

The lane was surfaced in gravel, which resisted and spit and almost caused me to lose control, but I slowed down and we passed by the leafy green back yards of homes that had once housed Folly’s neighbours and friends. She’d told me her house was yellow, and there was only one yellow house, at the end of the lane, on the corner.

“Go in the back way,” said Folly. We got off the bike and opened the gate, stepping into a tidy green garden with a mature ornamental cherry tree, masses of sumac starting to change color, and a small pup tent set up on the flat lawn.

“This is the way you went to school, and to the park?” I asked her.

She nodded. She was wearing a fleece hoodie that was too big for her and fit more like a dress, and denim leggings with rubber boots. Her hair was uncombed and tangled from the bike ride. She was deathly pale.

The gate had a rusted metal bell on it, that clanged when it was shut, no doubt meant as an alert for Folly’s mother or father. The lawn, once carefully tended grass, was now a ground cover of what looked like thyme.

She didn’t look in the pup tent on her way to the back porch, but I did. Inside was a rumpled tartan blanket and a flashlight.

Large-leafed ivy climbed the exterior walls of the house, drooping down over the doorway, which was probably not there the last time she was here.

It was unlocked. I let Folly lead the way, silent. This was her moment, her most important moment, and she had to face it alone and on her own terms. What could I do? A big stupid teenager who knew nothing of her family, her past, what she’d lost. I knew my own loss and I had some idea of what was churning around in her gut, but comfort could only come later.

The house was smaller than the one I grew up in, with the traditional separate, somewhat small rooms: kitchen, dining room, small formal living room, and a very untidy family room. On the floor and tables were boxed games, like Monopoly and Trivial Pursuit, open and the contents scattered about the room. There were towels, too, crumpled on the couch, and a bookcase with a full set of encyclopaedias, something I’d never seen before.

Folly picked up a towel and smelled it. She put it down again.

I looked at its toes, they were tiny; it was tiny, smaller than my baby doll, and just as bald. its face was tiny and wrinkled, its eyes were tightly shut as if it was in pain.

When I poked it in the tummy (when Mama wasn’t looking) it didn’t cry. I could wrap my whole hand around its foot or its hand and it would disappear in my fist.

“He is so tiny and beautiful,” said Mama, not to me, but to someone else. Jesus? She held it up against her face, breathing it in.

I wasn’t tiny, not any more, not yet. Mama didn’t notice when I stopped eating. She put my cheese sandwich and fruit salad on the table. She fed it milk from her breast. She put Kentucky Fried Chicken and coleslaw in cardboard tubs on the table. She took it to the changing table and wiped its bum with a soft white cloth. She gave me a dixiecup full of vanilla ice cream and a small wooden paddle to eat with. She rocked it in her arms, walking round and round, singing “Mama’s gonna buy you a mockingbird”.

When I fell asleep at school, Mama said, “I’m sorry, kitty, baby kept you awake.” I didn’t hear it cry at night. It slept in Mama’s bed.

Gramma came to stay. She held it, saying, “He is so tiny!” And then she saw me watching, and took me out to the front porch, where there was a bench, and we sat down, and she took me into her lap.

“You are thin,” Gramma said. I squirmed. “What’s wrong with your eyes, kitty?” She put her face close to mine. My eyes had fallen inside my head so I could hardly see out.

Gramma wrapped me up in her arms and I disappeared, just like its tiny foot disappeared in my fist.

Gramma brought me something that moved. It was covered in soft grey fur, striped, with ears too big for its head and a tiny nose and tiny paws. It was warm and purred when I held it to my chest.

“What will you call him?” Gramma asked me.

“What shall we call the baby?” Mama asked me.

He wrapped a tiny hand around my finger. “Can we call him Joe, same as daddy?”

Wednesday! How you doing?

I’m busy at the moment, with buying a new car (to take the place of my 17-year old current vehicle) and my two brothers arriving for a visit tomorrow.

I have a penchant for welcoming guests, despite my bitching, and over the next few days I suspect I will be doing a lot of cooking and making excuses to drive my brand new shiny car.

Apropos of nothing, please allow me to present a few of my favourite cartoons: 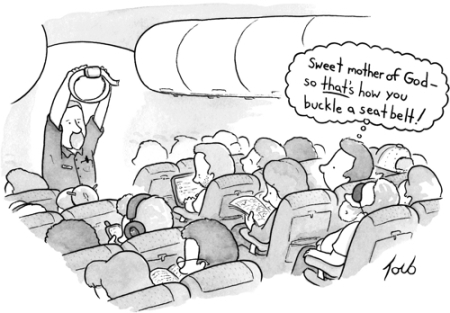 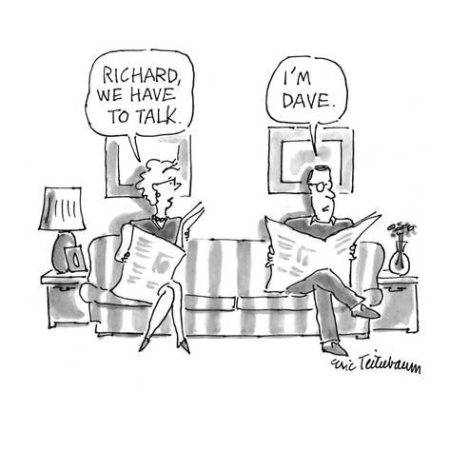 While I always look to Wednesday, whose child is allegedly full of woe (that’s me!), with great anticipation, this week’s prompt is, as it was November 23, 2016, is the concept of anticipation. I think a better word for this week would have been repeat. Nothing wrong with repeats. I watched a rerun of Seinfeld last night, the one where he hangs out in the office building lobby hoping to run into a woman he met, and George introduces us to his alter ego, “Art Vandelay.” Funny– but really, not as sharp as I remembered it. Part of the show’s charm now is its, um, historic value. Look at the size of those cordless phones! Where are they– in a video rental store! Dated, but the humour still sticks.

In the spirit of “repeat” may I present the first of several of my favourite cartoons? 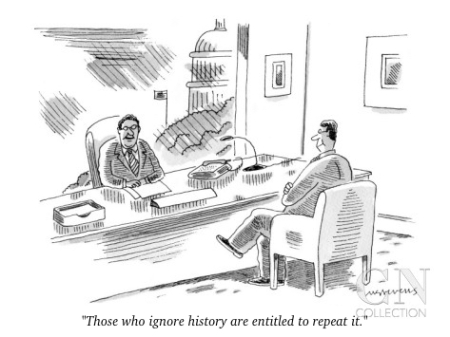 This next is not history repeating itself, but taking two frustrating steps backward:

Finally, I had to go to an oral surgeon yesterday. I am a nervous dental patient so had sedation, and today am swollen and full of prescription drugs. However, at least I did not have this experience: