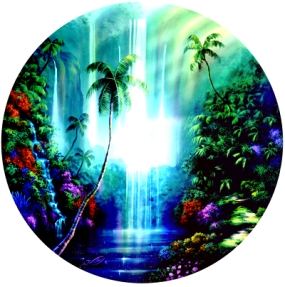 “What in hell are you wearing, Leep?” asked Deborah, when she looked up from the mixing bowl. She was using a hand mixer to bake a Duncan Hines cake. Leep had a fleeting moment of intense desire to lick the chocolate batter off the beaters. Something was burning. It was the oven preheating, and making the kitchen fragrant with burnt pizza sauce.

Deborah’s mother, Beth (or Lizzie, as Leep called her, in his head) wasn’t in the vicinity to chide her daughter for being rude, as she usually did when Deb made a thoughtless comment about Leep. It wasn’t as if he wasn’t used to it. Pretty well everyone at the mill did the same. Deborah’s dead husband, Vincent, used to make all kinds of comments. To be honest, Leep was never quite sure if they were joking around or what. You have to develop a thick skin when you are kind of quiet, like Leep.

Still, Leep could feel the roots of his hair grow hot. His face was probably red.

“It was a gift,” said Leep, immediately feeling he had betrayed his new editor, Amanda Thirsty, who had gifted the shirt to him when it was too small for her brother. Instead of tacitly admitting there was something wrong with the shirt and blaming Amanda, Leep should have stepped up and defended it. Was it too late?

“It’s godawful. What the fuck,” said Deborah. She might have been talking about the weather. It wasn’t important. She was just pointing it out; she didn’t care.

She put the mixer on a cutting board, and poured the batter from the bowl into two prepared, round cake tins.

The short-sleeved shirt was covered in images of waterfalls, flying fish, hibiscus, and something that looked like fat, green worms. Even Leep wasn’t sure what they were. It was not the kind of thing he usually wore. Maybe he wanted to show Deborah and Lizzie that he had depth. He didn’t just wear plain t-shirts and jackets. This was colourful and vintage. Amanda’s brother liked vintage things, and antiques and stuff. But in this case, if Leep really thought about it, maybe it wasn’t really too small. Maybe her brother hated the pattern, too.

“Oh my god, Leep!” said Lizzie as she suddenly stumbled into the kitchen and dropped two grocery bags onto the counter. “Crazy shirt! I love it. Reminds me of when Deb’s father and I were stationed in Hawaii.” She wore denim capris and a cropped white shirt. Her hair was pulled back in a rough ponytail, strands of hair stuck to a sweaty forehead. She took Leep’s breath away.

“It’s hideous,” said Deborah, careful setting the cake pans onto the rack in the oven.

“Deborah, you insist on being rude to Leep,” Lizzie said, and Leep blushed again. “Oooh, chocolate batter!” She scooped up both the mixer beaters and gave one to Leep. “Put the milk and butter away, would you Deb?” And she led Leep out onto the back patio, where they sat in plastic strapped lawn chairs and licked the batter.

“Does this remind you of your mother’s kitchen when you were a kid?” Lizzie asked. “You know when she baked… and later there would be icing to lick.”

“Oh sure,” Leep lied. He had the memory, but it wasn’t real. His mother had never baked a cake, or given her son a beater coated in chocolate batter. It didn’t taste quite as good as he had imagined, but it felt pretty nice pretending it did.