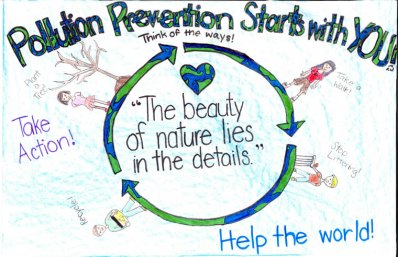 Yes, children: Help the world. Think of the ways. Walk more. Don’t litter. Plant a tree. Recycle your pop cans. If you don’t, everything will die and we will all choke to death. Including puppies.

Something about the way we teach ecology to children rankles. They can be worked into a frenzy over juice boxes. Taught to fear asphyxiation if parents idle their cars beside the school waiting for the final bell. Are willing to pick a square of cellophane out of a garbage bin for the sake of recycling.

Why so much pressure on the kids, when the greater reasons for life-threatening, world-ending pollution rest in the hands of the polluters and the politicians who enable and bless them?

Certainly every little bit helps. It is important to recycle, to value trees and plants, to be aware that small changes add up.

But I don’t remember, as a child, being unable to sleep because the glaciers are melting, or having a panic attack when a juice box ends up in the trash can. Guilt and hopelessness make us panic and give us insomnia. Let’s stop loading the responsibility for a clean future, if we have a future, on six year olds.

Let’s teach them a little bit about ethics and civics. Give them relevant information that allows them to assess choices in the products they use. Let them understand the power of the consumer and of the vote and, yes, even of peaceful resistance.

Children aren’t stupid. I’ve worked with children and they constantly floored me with their wisdom and common sense. Let’s arm these children, sensibly and without terror, with the tools they need to face a real crisis and transform a future that is not as bright as it should be, or as bright as they deserve.

“Tree” is the very solid, earthy word prompt for today. What do you think of when you think of the word tree? I think of a few things: my childhood drawings of trees, with the brown trunk and branches and green leaves, set in a flat earth. I also think of forests, thick dense forests, and I think of Haiti, which doesn’t have any. I think of the trees at the side of the highway as we travel through the mountains. Sometimes I think they are sentient beings, when I have been in the car too long without fresh air. But who knows?

Which of the two below is sentient? 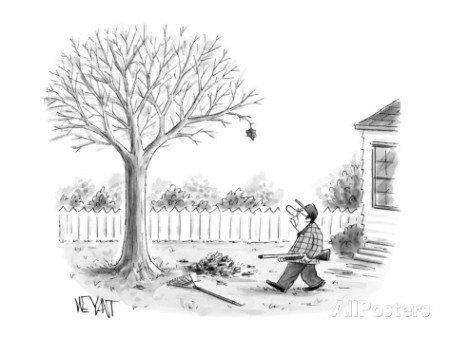 And human beings, while sentient, are not necessarily wise. 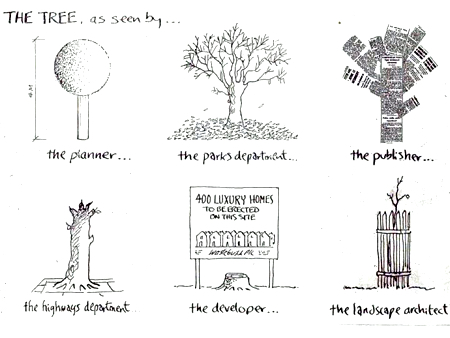 Have a green week! 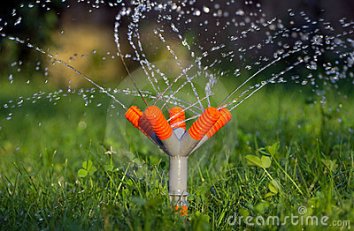 Jerry Plankton was pulling up his lawn– again, the second time in as many years. Technically, he’d hired Lloyd to do it, and Lloyd was actually, begrudgingly pulling up the existing green mat, a task that was taking much longer than he anticipated, as he hadn’t expected super glue-like adhesion to the ground. The rolls of sod he had planned to lay after lunch languished in the trailer he towed behind his red F250, and one of his guys put a hose on them every so often, so they wouldn’t completely dry out or die out in this unseasonable heat.

Ms Roades, Jerry’s new next door neighbour, came out to observe for a few minutes, and chat with him about the warm, late summer weather. Her full name was Lily-Rose Roades, which Jerry thought had a nice ring to it. She was the new teacher at the high school, quite young, unmarried, and perfect for the tiny starter home next to Jerry’s sprawling ranch house. She had a cat, Friendly, who was not, and who peed on and pooped beside Jerry’s beloved roses. But that wasn’t Ms Roades’ fault.

She didn’t say anything about his roses, despite the fact that they had been talked about up and down the block, and should have been talked about. Nor did she mention his shasta daisies, feathers of astilbe, or the impatiens, larkspur and nicotiana that filled in the front garden. His famous throughout the town, his White and Blue garden, was now a travesty.

He was seventy-two years old. Lately the perfect lawn had been hard to maintain and water. When he was younger he loved to get the hose out and leisurely water the grass and plants after supper, when the air was soft and cool and quiet. But it became problematic to stand on his feet for any length of time, and to bend over to dig out the dandelions, and to run his hand mower over the lawn every five days. But how could he part with the green grass that framed his white roses so exquisitely?

Enter Super Green Grass-X Ultra Titanium. His natural, blotchy green lawn was replaced with this state-of-the-art artificial lawn, which, to be honest, really did look real, for awhile. It wasn’t bright green, or lime green– it was a dark, earthy green that the salesman, Alvin McCartney, dared anyone to tell was not the real thing, from a distance.

Until the hot spell. The blades of artificial grass seemed to fuse together, and form spikes that were painful to walk on in bare feet, and what was worse, the lawn turned varying shades of yellow and a strange, ashy brown. Jerry called Alvin, upset and distressed, but Alvin had the solution. And he wouldn’t even charge Jerry for the labour, just for the paint.

Alvin’s team of spray painters arrived early one Friday morning, and were almost done by the time Jerry came out with a cup of coffee in hand, just as Ms Roades was getting into her car to go to work. They waved. Jerry thought the new green colour was fine. He was relieved Alvin had solved the problem so painlessly, and the spray paint wasn’t even that expensive.

“Don’t walk on it,” one of the sprayers told him as they packed up their gear. “It takes a while to dry.”

In fact, it did not dry. Clouds rolled in from the south, dark and flat, and a deluge followed. Jerry, despondent, looked out the window as the green tint washed away, leaving the yellow and brown spikes to be pummelled with rain.

Less than a week later the heat returned, and his roses, white astilbe, nicotiana, impatiens, shasta daisies and larkspur bloomed in a colour Jerry had never seen before. Was it the colour of alien vomit? It was a bright, lemony green, mottled with darker green.

His precious showpiece became a Blue and Alien Vomit garden. Unique, to be sure, but not what Jerry had in mind. Ever. The neighbours were curious, and took pictures. Linney Sitwell, who couldn’t grow yarrow in a barrel, snickered every time he walked by. Jerry kept his cool. He never knew when Ms Roades might be looking out the window, or picking her tomatoes from the containers on the front porch. He didn’t want her to think he was ill-tempered.

Jerry waited as long as he could before pruning all the flowers back. He wasn’t sure what colour they would bloom the next time. He didn’t know how pernicious the green dye would be. He would have to be patient.

Jerry decided not to call Alvin McCartney and tell him what happened, nor did he dispute the bill for the green spray paint. Life was too short. He called Lloyd, Dennis Keeley’s boy, who ran a small lawn maintenance company, to pull out the plastic grass and lay some new sod.

Even though it grew dark, Lloyd did Jerry a favour by not leaving until all the sod was down and he had helped Jerry set up some sprinklers to shower the grass with water overnight. He did not charge overtime.

Lloyd wanted to install a sprinkler system for Jerry, in addition to the lawn-cutting service Jerry hired him for. It seemed the logical thing, but Jerry decided against it.

On soft, warm evenings after supper, Jerry sat in a white plastic lawn chair with his garden hose, spraying his new lawn and all the roses and flowers, and the oregano plant which volunteered in the corner by the hedge.

Ms Roades liked to water her tomatoes and herb garden in the evening, just before dark. They had conversations. Sometimes they had a cup of decaf coffee, or a glass of white wine. Except for the cat, Friendly, Jerry Plankton was pretty happy that Ms Roades had moved next door.