Dammit and bloody hell! I know this is not a polite way to begin a post, but WordPress is giving me grief by trying to force me to switch to their “new” block editor despite my resistance, and I am currently writing in some kind of Frankenstein classic editor hybrid, which is random and fickle and well, dammit and bloody hell!

So how are you?

I like today’s prompt, since it gives me a platform to promote my belief that most of the world’s ills could be solved if we all of us had good manners. Good manners means putting others at ease while still maintaining dignity yourself—imagine if politicians took up the banner!

People might say, Excuse me, sir, you look hungry and cold. Let me do my best to ease your suffering, since I am warm and well fed and understand that I am part of the same community as you! Madam, you are going to bring a newborn child into our community? Let me help you gain access to the best care possible, since resources are abundant and should not be withheld! Child, you look neglected and confused. Perhaps a humane safety net and access to a fine education can prevent tragic consequences in our community down the road! May god bless you, whether you believe in god or not, I respect your choices!

Kindness matters with regard to monumental issues as well as with small gestures. Everyone take a deep breath— a healthy breath behind a mask if need be—and go forth and save the world with good manners!

Now here are a few of my favourite cartoons, very loosely related to today’s prompt, “etiquette”: 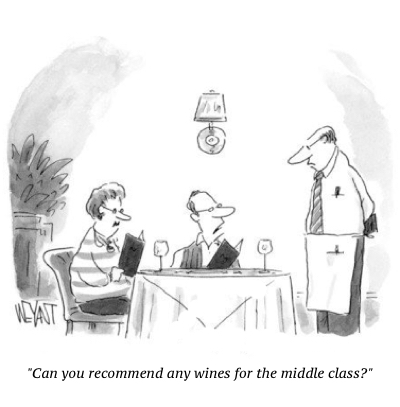 Blame WordPress if this post is a dammit bloody hell mess, and have a happy week! “How can I stay calm when my daughter is being born here?” said Cash.

They were in the mattress department at Sears. Local staff had called an ambulance, but the baby girl was not prepared to wait. Both Virginia and Cash were covered in a painful, sticky sweat and both were gasping for air. Virginia alternately sat up on the edge of the bed, vomited into a plastic wastebasket, and lay flat on her back, knees up, panting like Cash’s dog Buzz in a heat wave.

Ms Cooper, the Mattress Manager, had sent staff off in search of a doctor or nurse because outside the cosy department store, where music about Tannenbaums was piped soothingly through the sound system, snow continued to fall and form beautiful fluffy white blankets which made the streets impossible for any vehicle, never mind an ambulance, to traverse quickly and safely.

“Here comes Doctor Deepak!” exclaimed a young blonde woman who wore a name tag that said, “Merry Christmas, I’m SHANNON, How can I help you today?”

The doctor was small and very dark, wearing a Christmas sweater embroidered with Christmas balls and, for unknown reasons, butterflies, but he pulled the sweater over his head anyway and tossed it on the lower bunk of a Thomas the Tank Engine-themed bunk bed set.

“I’m a vet,” he said, both sheepishly and loudly.

“Do NOT put your hand up there!” cried Cash. He had no idea what was he was saying. He was disoriented. He had visions of James Herriot and a the breach birth of a calf. “Anyway, we can see the baby’s head.”

There was indeed crowning going on with the baby’s head. Ms Cooper brought a security guard and a large tumbler of ice for Virginia. Shannon fetched a bowl with cool water and a wash cloth, which Cash applied to the back of his neck, fearing he would faint, before dabbing the cool cloth on Virginia’s forehead. Doctor Deepak rolled up his shirt sleeves ominously, and told Virginia to breathe. She and Cash forgot all their breathing lessons, and Virginia actually had a fleeting thought wishing she’d had Cash shave her legs that morning, and then she almost blacked out when a knot of pain twisted in her abdomen, and they had no time to think about the baby who was four weeks early.

Altogether, nine people witnessed the birth of their daughter, Echo, including Mr and Mrs Yankowich, who were shopping for a simple mattress cover for the spare bedroom because Mrs Yankowich’s father’s bladder could no longer be trusted overnight.

Echo, named after the valley in which she was conceived, was bloody, wrinkled, and covered in slime, had ten fingers and toes, and Shannon and the security guard, Ernie, wept like it was their last day on earth.