It’s hard to imagine the Arctic cold when it’s 32F and there are waves languidly lapping the sand. Just as it’s difficult to remember the feeling of a hot sun on your skin on a frozen winter day.

Or a teenager utterly unable to relate to an older person; and an older person critical of the young, having lost the memory of being young themselves.

(That last one doesn’t really work.)

Empathy, which requires imagination and good intentions, seems in short supply these days. That’s why there are such unnecessary divisions in the world: From politics, to art, religion, and generational, environmental, cultural and gender issues.

Trump supporters skew older, among other things, and like Trump, they often resemble the stereotypical angry old man ordering the kids off his lawn. They also tend to be culturally isolated; i.e. live in white communities with very little interaction with Black or brown people. They have a strong sense of entitlement and are hostile towards those who have more than they do— more money, maybe (but America worships the rich in general) but also in terms of education and status. They tend to favour authoritarianism, which is obvious not just in their blind support for Trump, but for their steadfast believe in a God, no matter how outlandishly her commandments are misinterpreted. But mainly, they lack imagination and good intentions.

It’s hard to imagine creatures actually suffering from the effects of climate change. It is much more convenient to side with those for whom the truth is too frightening to consider. It feels better to believe the authoritarian figures —not scientists, but politicians and religious leaders— who soothe their fears about horrific truths at the same time as they stoke fears about imaginary enemies, all the while being manipulated into accepting attitudes and policies that are damaging and harmful to them but which serve the wealthy elite.

Whew. I had no intention of dragging Trump into this post. Let’s step away from the Tr*mp, and browse a few of my favourite cartoons relating to the prompt, “Arctic”: 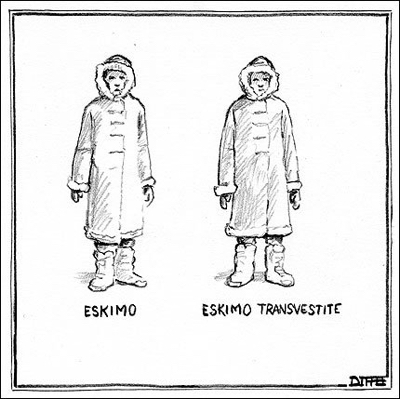