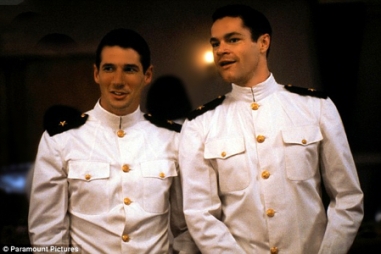 I wore a cotton dress, light blue, with embroidery at the neck. It was new, and I was freshly bathed and I used ion hair rollers to add shine to my pony tail. I put on just the right amount of make-up so that it appeared I wasn’t wearing any. He said he didn’t like make-up, but he meant he didn’t like colours, like red and blue and green. So I applied eyeliner and mascara with a light touch, and just a breath of blusher, and a hint of tinted lip gloss.

Lots of spouses were waiting– that’s what we called ourselves now, not “wives”, since so many women were now part of the navy; and some of those waiting on the pier, kids firmly in tow, were men. They had haggard but eager expressions on their faces. Now she was coming home, she would disembark and take charge of household and offspring duties again. It would be a relief for them until the next tour.

The wind was whipping through my hair and making my eyes water, so I put on a pair of sunglasses. I would take them off before we met– Carl believed people with things to hide wore sunglasses, like mobsters and cheaters, trying to hide their identity or their sins.

I had to hold on to the skirt of my dress so it didn’t fly up. Beth stood beside me– my best friend, next door neighbour, and wife of Carl’s best friend, Robert. We were a foursome to be reckoned with. We would be together at last, for all those dinners and then bridge, or to the pub and then pool, players and spectators at club hockey games, outings on the motorbikes. She wore far more practical jeans and a green cotton sweater. Robert wasn’t much bothered about what she wore, as long as she was modest.

She was careful to be modest. Robert had a temper. Oh, he would never strike her. But his constant, good-natured stream of jokes could turn ugly when he was provoked. Beth was the sensitive type, much more so than I was. Nothing Carl said bothered me too much.

The ship had docked. Waves slapped against the hull, and clouds scudded across the sky.

The crew gathered on deck. I could see Carl– because of his height he always stood out in a crowd. We were up-wind and couldn’t hear the directions on the ship’s loudspeaker, but we did see and hear the loud, happy roar of the crew as they made their way to the gangplanks and to their loved ones waiting on the dock.

It must have been lovely for them, departing from the ship after weeks at sea, into a different sea, of love and welcoming faces and arms ready to snatch and hug. All of us spouses had waited for the ship many times before, and we didn’t surge forward. We caught the eyes of our people, and waved frantically, smiling, and waited impatiently for them to reach us. I took my sunglasses off and put them into my bag.

Carl and Richard made their way towards us together, able to keep side by side despite the jostling of the crowd. A young family moved aside and I saw that as Carl and Richard approached, they were holding hands. When Carl looked up and spotted me, he squeezed Richard’s hand before releasing it.

I turned to Beth. She had seen it too. We suddenly, impulsively hugged. She smelled of freesia. When the boys reached us, they stood awkwardly as Beth and I clung to one another, laughing into each other’s ears with relief and joy.